During Christmas, you must have seen images of Santa Claus everywhere in your city. Whenever we hear the word, Christmas, our mind visualizes a heavyset man wearing a red suit, a red hat on his head, a long white beard, and a bag full of gifts. But the most important question is who is Santa Claus? Why do we see him at Christmas? What’s his relationship with Jesus’ birth?

The Origin of Santa Claus

The story of Santa Claus starts with Nicholas, who was born in the third century around 280 A.D. in Patara in Asia Minor (modern-day Turkey). His family was wealthy, strong in the Lord, and raised him in the word of God and taught him to be a true Christian. At his young age, his parents died and left him their wealth, obeying Jesus’ words to “sell all your possessions and give the money to the poor,”. Nicholas used his money to help the poor, sick, and needy. Nicholas committed his life to serving God and later he was made Bishop of Myra. He became famous for his generosity to the needy and love for children and because of his kindness, he was made a Saint.

“ There are some stories and legends which talk about St. Nicholas but we don’t know if any of them are true.”

The first story tells about a poor man who had three daughters who were unmarried because he didn’t have money for a dowry. So St. Nicholas secretly dropped a bag of gold down in the chimney of the house (so that the oldest daughter can get married). The bag fell into a stocking which was hung by the fire to dry. This led to the custom of children putting out shoes, hanging stockings and waiting for gifts from St. Nicholas.

Another story is about some sailors who were in the midst of a deadly storm, the storm was raging around them and all the men were afraid that they would drown in the sea. They prayed to St. Nicholas to help them. Suddenly, St. Nicholas was standing with them on the deck. He ordered the sea to be calm, the sea became calm and all the men reached the port safely.

For more stories, you can visit the St. Nicholas Center.

In the time of Roman Emperor Diocletian, persecution of Christians took place, and St. Nicholas was also imprisoned and exiled for his faith. During the reign of the first Roman Christian Emperor Constantine, He declared Christianity a legal religion. Once persecution ended, Christians got freedom. However, there were serious disagreements regarding the doctrine between Christians. So in 325 A. D. Constantine gathered all bishops from all over the empire in Nicea to discuss doctrinal issues and bring unity. St. Nicholas was one of those bishops who attended the Council of Nicaea. St. Nicholas died on December 6, 343 A.D. (Assumption) in Myra. 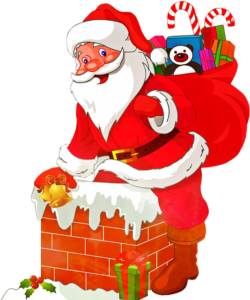 In 1823, an American poet wrote a poem about a visit from St. Nicholas called, “T’was the Night Before Christmas” also known as “A Visit From St. Nicholas”.This poem has been the main driving force in shaping the view of Santa as we know it for in this poem, it gives specific descriptions about St. Nicholas.

The poem describes St. Nicholas as a chubby and plump man with a round belly, a white beard, dressed in fur from head to toe, having a bag of toys slumped behind his back. The poem continues to speak of St. Nicholas having a miniature sleigh and 8 tiny reindeers and goes on to name them: Dasher, Dancer, Prancer, Vixen, Comet, Cupid, Donner, Blitzen. Later on, in 1949, Rudolph the Red Nose Reindeer song came out, making it 9 reindeers in total.

In 1863, the magazine, Harper’s Weekly, published the first illustration of St. Nicholas by Thomas Nast and he continued to draw Santa every Christmas for the next 20 years. Thomas Nast drew Santa’s illustration on the basis of historical information and the poem “A Visit from St. Nicholas” and this is the time when Santa got a big tummy and the style of red and white outfit as we see him today.

Later In 1920, Santa was used for the first time in Coca Cola Adverts looking like the drawing of Thomas Nast. In 1931, the classic “Coke Santa” was drawn by artist Haddon Sundblom.

Everything we know and think of Santa Claus today originates from the poems, advertisements, and music during these times. This view of Santa Claus became the norm for Americans. Many songs began to emerge starting in the 20th century that also solidified the view of who Santa Claus is and everything that makes him up today. Like folk tale traditions, generations and generations of families tell their children the story of Santa Claus, making it the tradition we have today.

Why do we see him on Christmas?

One may still wonder, why is Santa Claus even associated with Christmas Day? That also is explained by history. After the reformation in the 16th century in northern Europe, St. Nicholas became unpopular, but somebody has to come on Christmas and give gifts to children. So he was known as “Father Christmas” in the UK. In other countries like Austria and Germany, he was known as “Christkind” and in France ‘Père Nöel’. For early Americans, his name was “KrissKringle”. The Puritans had done away with St. Nicholas and banned Christmas altogether. But the Dutch held on to their tradition and brought it with them to America. The Dutch called him “Sinterklaas”, and eventually became Santa Claus.

In honor of St. Nicholas, the gift giver, Christians began to celebrate December 6 by giving presents in European countries. Over time, most children began to receive their presents on Christmas Eve night or early Christmas morning. As the years and decades past, it became that Santa Claus is associated with Christmas and is celebrated on December 25th.

St. Nicholas showed Christ and His love through his entire life and lived a devoted Christian life. Are you showing Christ through your life and works?

What is Christmas? Why do we celebrate it on the 25th of December?