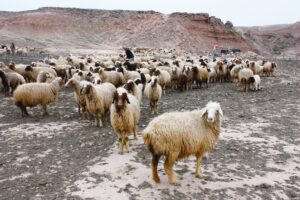 I am the Good Shepherd – Jesus

“I am the good shepherd. The good shepherd lays down his life for the sheep. The hired hand is not the shepherd and does not own the sheep. So when he sees the wolf coming, he abandons the sheep and runs away. Then the wolf attacks the flock and scatters it. The man runs away because he is a hired hand and cares nothing for the sheep. “I am the good shepherd; I know my sheep and my sheep know me—  just as the Father knows me and I know the Father—and I lay down my life for the sheep. I have other sheep that are not of this sheep pen. I must bring them also. They too will listen to my voice, and there shall be one flock and one shepherd. The reason my Father loves me is that I lay down my life—only to take it up again. No one takes it from me, but I lay it down of my own accord. I have authority to lay it down and authority to take it up again. This command I received from my Father”  (John 10:11-18).

In the very beginning of the first verse, Jesus declares that He is “The Good Shepherd” and not simply “a shepherd”. Let’s understand why He calls Him the “Good” Shepherd? The word good is Kalos in Greek which means noble, beautiful, or good in contrast to wicked, selfish, or mean. Not only did he mention the word but He went further and described how the Good Shepherd acts and what He does for His sheep in the next verses. 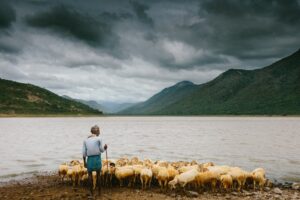 The Good Shepherd is unlike the hired hand. Jesus says He lays down His life for the sheep because the sheep are His and He calls them as His. The Good Shepherd never abandons the sheep neither does he run away, but rather protects them from every danger, even if there is a life taking risk. The sheep are so defenseless and mostly dependent on the shepherd for the food, for water, direction, and for protection and Jesus knows how to take care of His own sheep. The sheep can hear the shepherd’s calling and respond to him because they know the Shepherd and the Shepherd knows them.

In the beginning, Jesus started to save the lost sheep of Israel but Jesus didn’t come to save Israel alone. He went even further than that. I have other sheep that are not of this sheep pen. I must bring them also. They too will listen to my voice, and there shall be one flock and one shepherd (John 10:16).

Jesus is the Good Shepherd and He calls for everyone. His calling is not only for Jews but for everyone who would listen to Him. 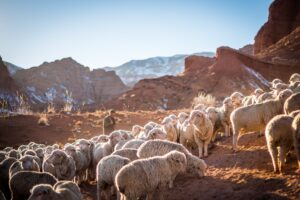 Jesus Is The Good Shepherd.

Jesus gave His life on the cross as “The Good Shepherd” for His Sheep. It’s only through Him that we can receive salvation and be a part of His kingdom. Though He had the power, He willingly gave His life for us. “No one takes [my life] from me, but I lay it down of my own accord. I have authority to lay it down, and I have authority to take it up again” (John 10:18). He chose to die on the cross so that we can have eternal life with Him in heaven.

Jesus is our Shepherd and we are His own sheep. What an amazing thing it is to be owned by Him. He takes care of us and leads us into His glorious happiness. He never abandons us or forsakes us because He loves us so much that He has given His life to make us His own.